You are the host of an event for which there are \(n\) candidates to be invited and you possess sufficient resources to host all candidates. Let the nature of the event be such that it seems personally attached to you, yet also fairly polarizing in its experience. In other words:

Moreover, one might weigh the ambitions wrt non-desiring invitees and desiring non-invitees differently. For instance, one might consider the discomfort of someone having to decline, and thereby expressing his/her lack of appreciation, worse than the missed opportunity of someone not attending who would’ve desired to.

Concretely, this gives rise to the goal of minimizing the following quantities:

If we had perfect a priori knowledge about candidates desires and would either invite according to it or its negation, our loss function would evaluate to \(0\) or \(n\) respectively. As those represent ‘best’ and ‘worst’ cases, we can set our expectation of algorithm performance to be within the range \([0, n]\).

Algorithms and their performances

Let’s start off with some naive deterministic algorithms before we delve into randomized approaches.

However, as \(q\) is assumed to be unknown, we cannot evaluate said condition. In other words, depending on \(\alpha\) and \(q\), one of Naive 1 and Naive 2 will perform well, the other badly. This randomized approach will lie somewhere in-between. Allowing for an adaptive approach, i.e. letting \(p\) vary over time, we could ‘push’ \(p\) closer to either \(0\) or \(1\), whichever is preferable. Such a method would naturally end up with a loss between that of the fixed starting probability \(p\) and the approached ‘invite all’ or ‘invite nobody’ approach. For instance, if asking everybody is the optimal choice, the relative ordering of expected losses looks as follows: 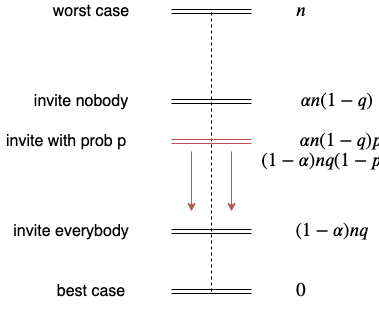 The red arrows indicate the direction in which we’d like to shift the randomized approach by making it adaptive.

Note that in order to devise an adaptive strategy, we need to consecutively sample feedback. Hence candidates invitations are no longer i.i.d. but rather invited one after another, each possibly influencing all of the remaining candidates.

In order to analyze the expected loss of this approach, it turns out useful to ask another question first: How many candidates will be invited with this approach?

The iterative process of updating \(p_i\) can be thought of as a random walk on the following Markov chain:

By definition, the likelihood of candidate \(i\) receiving an invitation depends on the state we find ourselves in in timestep \(i\). Referring to a state and its associated value \(p_i\) by \(S_i\), our question of the total amount of invitees translates to:

On the one hand, it might seem like a disappointment that it is not always an improvement over the randomized approach with fixed probability. On the other hand, we now see (more clearly) why such hopes were unfounded: Our update rule is independent of \(\alpha\). Yet, \(\alpha\) determines the loss function. An alternative approach, paving the way towards strict superiority and leveraging \(\alpha\) in the update step seems very feasible, albeit possibly less simple and clean. :)

Furthermore, note that the dependence of \(r\) on \(n\) implies that given the satisfaction of either condition, the loss of this approach converges towards the loss of optimal fixed \(p\) with increasing number of candidates, \(n\).