This post is about a browser add-on that is hopefully a drop in the ocean towards a rather ambitious goal. It’s called TimeIsMoney.

A while back I listened to Sam Harris’ podcast with Tristan Harris. What remained was following:

I agreed that most technology is agnostic. At the same time, a lot of technology stemming from or being a byproduct of the attention economy is rather geared towards a usage that is a net disadvantage for the user. What I mean by that is that such technology has both advantages and disadvantages that can at least partly be isolated. Yet a somewhat unconscious usage, think: path of least resistance, will often weigh the disadvantages more heavily. I don’t see why this would be an intrinsic property of such products and services, it just happens to be the case for most examples I could think of.

On the one hand, one could analyze technology based on those criteria and consequently disregard it if it turns out to favor negative outcomes. On the other hand, throwing away its advantages is a pity!

Ideally, one would use the technology and very frequently, consciously reevaluate its consequences and adapt one’s usage accordingly. This burden of numerous reflection and decision making, multiplied by the great amount of features we use on a daily basis seems overwhelming and unbearable to me. What I would want, is a tool that takes away some of the reflection and evaluation. It should take on the role of a beacon warning me from a likely transition from net positive to net negative consequences. Now this seems like a really ambitious expectation to me!

Let’s say ‘good usage’ of product P is a fashion of using it that one would label desirable when consciously meditating on it. ‘Bad usage is’ otherwise. In general, good and bad usage are interwoven on the temporal axis, i.e. that good and bad usage can following each other in whatever possibility. I will make the simplifying assumption that one starts using P with the intention of good usage in mind. This will not hold for everything and everyone but I found that it is fairly representable of my behavior. Under that assumption, the user begins with the intention of good usage in mind, his attention will be captivated and his usage will often drift towards bad usage. In other words with diminishing returns per timestep the cost (time) remains constant per timestep. In such a scenario the task of the wished-for tool is substantially easier, it only has to spot or hint at the threshold at which the costs surpass the returns. Think of the monotonically decreasing function \(f(t) = return(t) - cost\) of which one tries to find its root.

Even this relaxation of the problem seemed relatively ambitious and by no means do I dare think that the tool provides such a functionality. I merely think that Time Is Money goes into the right direction. It has no knowledge about where your threshold lies, it tries to make querying for surpassing the threshold easier for its user.

More concretely, it aims to give you a proxy of whether your browsing behavior has surpassed the threshold by judging the amount of time spent on critical websites.

For the sake of concreteness, let’s have a look at the life of a visit of Facebook.com, with both its positive and negative aspects. 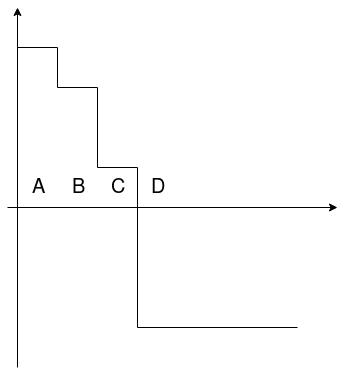 You can define a set of websites which you think could come with bad usage, i.e. drag you into something you did not approve of in the first place. The time spent by you on said websites will be recorded and accumulated on a weekly basis. This counter is displayed in the browser window.

I think that many people, including myself, intuitively value their time less than the money they earn in this equivalent duration of time. As this goes against the idea of a thought-through time allocation, I gave it a humble try to short-circuit this intuition. Hence, instead of an amount of time, an amount of money is displayed, that one could have earned in the meantime. An hourly wage can be defined by you.

Part of this project’s motivation is for it to be open source and to do without third-party-communication.

How it doesn’t work

System as well browser crashes can reset the storage of the counter information as well as preferences, e.g. websites and hourly wages. Even though I initially found the idea of having everything stores locally attractive, this will probably ask for cloud storage in the long run.

On a more fine-grained level, the ‘accounting’ is not flawless. Detecting idle times, standbys or lockings of devices are not all detectable via clean subscriber paradigms but currently also rely on hand-crafted heuristics. This bugs me quite a bit.

At least tab switches and explicit closures of the browser work well as far as I can tell.

In case you have suggestions how to handle said scenarios in a nicer way, an idea how to write tests for such scenarios or general comments, feel free to get in touch via twitter.